As a massage therapist, there is nothing more frustrating than working on a person’s body and not being able to make a difference in the tissue.

There could be dozens of reasons why a person’s body isn’t responding to treatment.  Over thousands of clinical hours and two decades studying human movement and bodywork, I have developed certain protocols in dealing with acute and chronic musculoskeletal dysfunctions in the body.

In this series, I will provide you with quick, concise, and accurate information on how I have successfully treated certain conditions in the body over and over.  I am making this intellectual information available free of charge because I believe in inclusivity instead of exclusivity, and I want the most number of people on this earth to be able to be helped with this knowledge.

Disclaimer: It is YOUR responsibility to adapt this information to the training you have received and are qualified to do, and work within your scope of practice and laws in your area.

Problem: In prone position, one side of the ribs is higher than the other.

Question?: Is it an issue isolated to the ribs? (If yes, read on) Is it a rotated spine issue? (If yes, see Massage Hack #4)

Assessment: For a rib-only issue would be to see if the spine is in neutral through the thoracics. If yes, then the ribs could be being pulled laterally caused by a restriction in the subscapularis, serratus anterior/latissimus dorsi area, OR at the (anterior) sternocostal joints, pulling the ribs that appear higher into a more lateral/anterior position in relationship to the lower side.

Wait, you ask… why do the ribs appear higher if they are being pulled laterally or anteriorly? Because the rib heads (where the rib meets the spine at the facet joint are most likely eccentrically loaded (stabilizing) therefore the rib heads are not set in the joint neutrally, and appear to be posteriorly ‘higher’ in comparison to the other side.

Treatment: If you have an Ortho-Bionomy release for the ribs, this would be the place to start.

If you are a direct tissue therapist, start the client side-lying with arm over head, soften the lateral rib cage and all the muscles that attach from the long head origin of the triceps brachii on the scapula to the rotator cuff muscles, to the latissimus dorsi and serratus anterior. Look at the intercostals as well. Then ask the client to turn supine and assess the chest muscles, subclavius, and intercostals where the costal cartilage meets the sternum.

ReCheck: Ask the client to lie prone again and assess the rib height to see if it has been corrected. If it has not been corrected, read Massage Hack #4 which talks about rotation of the spine as a cause of rib cage imbalance. 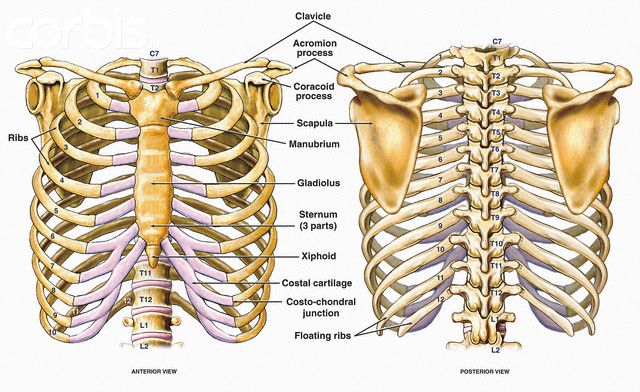